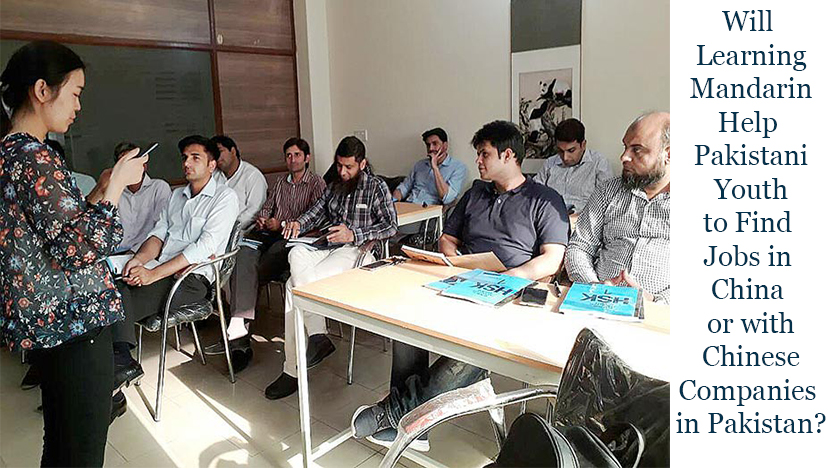 Will Learning Mandarin Help Pakistani Youth to Find Jobs in China or with Chinese Companies in Pakistan?

Pakistan has been friends with china but now the friendship has come to business and trade agreements. China has started a one of its kind projects in collaboration with Pakistan. The project is part of china’s bigger project which is ‘one belt, one road’ initiative. China Pakistan Economic Corridor is termed as the game changer and it will change the future of Pakistan. Pakistan is only a partner to china in this project but is aiming at developing is Baluchistan province same as china is aiming at developing its kashgar region which is less developed than the rest.

Thought, there are a lot of whispers about the CPEC and how are governments are reluctant to share the news and progress with the media and masses. The project will come as a threat to India and USA as both are not in favor of the program and with Saudi Arabia showing its interest in the region the project, things can get a little complex.

With the project in Pakistan, there is a huge number of Chinese visiting, staying in Pakistan. Everyone is predicting how there will be Chinese companies opening their branches here, Chinese restaurants to be build in major cities and there is already some catering to the needs of Chinese in Pakistan. With the predictions going all around, everyone is keen on learning the Chinese languages to be well prepared for the incoming future jobs.

There are many academies, educational institutions that are offering Chinese short courses, long courses and other foreign language courses. Even the ‘University of the Punjab’ in Lahore has a Chinese department where all the staff, administration is of Chinese people and they are offering courses in Chinese language.

Along with this, other r universities like FCCU, Kinnard are announcing different language courses in Chinese, mandarin as it is the best as it serves better than learning simple Chinese language. The prospects of all these finding a job in china or with the Chinese companies in Pakistan are somewhat predicted as cpec is going to hire people from all over Pakistan and the candidates with the knowledge and command on Chinese language are better than the ones who don’t know the language. Chinese prefer to use their own language and it will help the employees communicate with them better.

Even in the remote areas of Baluchistan, locals are learning the language with the support of Pakistan army. Induction of the locals of the area will help produce alternative jobs for the people of the area, the area after the terrorist operations is facing problems in the establishment of businesses, which were destroyed during the war on terror. Prior to this, the inclination was towards learning English language. The initiative has generated 75000 jobs so far as quoted by the Chinese Ambassador and is going to carve out more opportunities for the people in the e future.