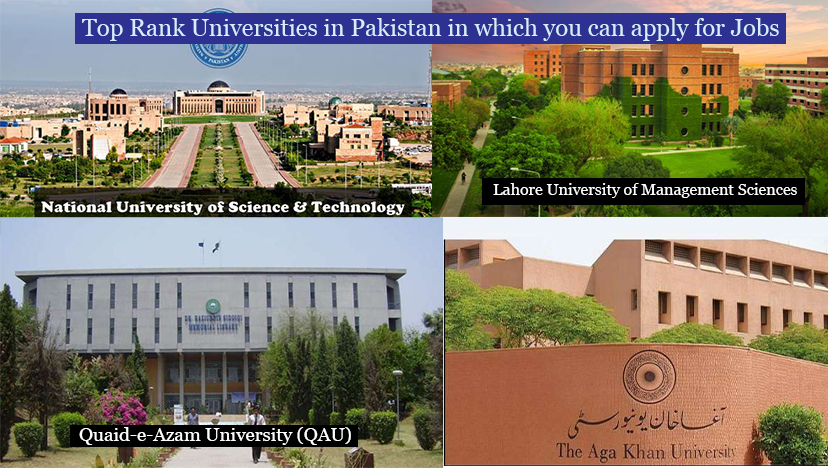 Every year the universities have to be ranked in order for making it easy for people who want to pursue their education from these universities. The rankings are based on different credentials and involve all the universities from around the globe and then the list includes the ones that have made it to the list of the universities issued. Pakistan has a lot to do in the education sector as the country is still far behind the international standards.

National University of sciences and technology

National University of Sciences and Technology (NUST) was came into being in March 1991 for the developement of higher scientific education in the country, especially in the fields of science and technology.

The university is one of the finest institutes in Pakistan that meets the international standards to some extent. They offer quite a wide range of courses but are especially knows for engineering programs and also for their research-oriented undergraduate, postgraduate and doctoral programs. It also provides the best of facilities to the students from hostel facility to gymnasium etc.

Quaid-e-Azam is a name in itself when it comes to government institutes. It is known for its research, diversity, and inclusion of many cultures into one place. Quaid-i-Azam University is one of the popular University for research in Pakistan. This is one of the best universities in Islamabad for study of postgraduate education but expanded through the 1980s to an interdisciplinary university offering undergraduate and postgraduate education. Every year, thousands of students apply for their undergraduate and postgraduate and it is extremely competitive. One needs to be good in all fields if he wants to get into the university. Jobs in Quaid e Azam University

Lahore University of management sciences or commonly referred to as ‘Lums’ is a dream of many and is quite famous in the country. The campus is very well established with the incorporation of all the modern facilities, great faculty and an environment that fully justifies with the claims being made every now and then. It is an independent research university in Pakistan. It is also very expensive for someone who belongs to a middle-class family and is often criticized for being restricted to the elite class. But the university does provide scholarships to the deserving students so they can have the time of their life.

The programs structured so that every activity enhances student learning and individual development. All activities are thus designed with definite learning objectives. The programs offered at LUMS not only require the capacity to work hard but also the ability to think analytically and to solve problems.

The University of Punjab was formally established with the convening of the first meeting of its Senate on October 14, 1882, at Simla. PU is at number 4th developed by British colonial authorities of old era. A large number of candidates want to get admission on all level of education in this prestigious university.

The university does have a history and is also one of the options available to the middle class and lower-middle-class families to get their children with a good education. The purpose is somewhat missing and with the increased political influence, no concept of accountability of the faculty members and administration, the system of the university is rotten and old. The university is extremely reluctant to incorporate new ways so that their students can keep up with the world or even compete with the other universities on the list.

No doubt, with such an area, resources, and the government, the university can be made a lot better than it is today but it will need the redirection of the vision, accountability and check and balance in place. It is time that the university considers its flaws and starts to fix them.

Aga Khan University is  famous for its outstanding culture of social development. In many fields: like healthcare and medical, training and education, research and public service in the developing world, the University prepares men and women to lead change in their societies and to thrive in the global economy.

The Agha Khan is known to be a reputable institution but we need to start working on having more like these because the growing population can’t be accommodated in all these institutions. Jobs in Karachi

COMSATS Institute of Information Technology (CIIT), is a Government university in Pakistan. It is a multi-campus university with its principal seat in Islamabad. It has a number of campuses across the country including Lahore, Wah, Attock, Sahiwal, and Abbottabad. It is the special thing about this university that it is one of the top 250 Asian Universities by QS University Rankings in 2014 and nationally it is ranked top-most in computer sciences and IT category.This is also the part of the Association of Commonwealth universities.

These universities might be successful to make it among the 1000’s of the top universities of Pakistan but we should aim to fall in the 100’s list.