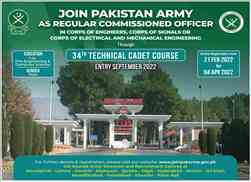 IN CORPS OF ENGINEERINS, CORPS OF SIGNALS OR
CORPS OF ELECTRICAL AND MECHANICAL ENGINEERING THROUGH
34th TECHNICAL CADET COURSE
ENTRY SEPTEMBER 2022 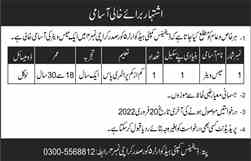 Every special public is informed that there is a vacancy for a Mess Waiter in Defense Company Headquarters 5 Corps Sadar Karachi No 4. 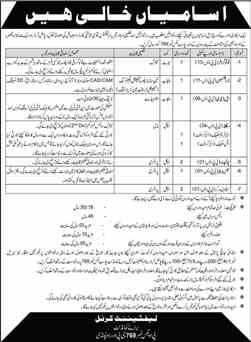 Applications are required for a government agency to fill the vacancies listed here. Submit your Applications to the post books number 769 along with your Academic Certificates, Experience Certificates, national ID card, Copies of domicile, Postal order, and one recent picture under the 15 days of advertisement. 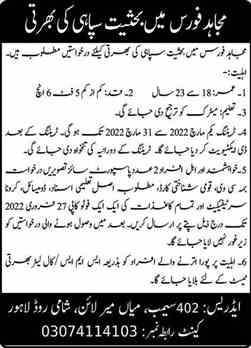 Recruitment as a Soldier in Mujahid Force

Applications are required for recruitment as a soldier in Mujahid Force. 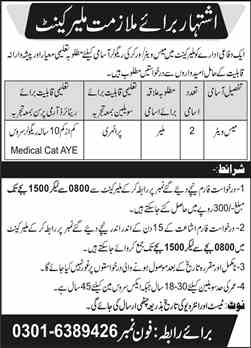 This page contains all new Army Jobs in multiple cities of Pakistan with each and every detail of advertisement and applying procedure. This is really a great opportunity for serving country. There are a lot of new career opportunities announce in Pakistan Army for male and female in a different department. You must check and read whole join pak army 2022 online registration process. Many young and experienced applicants are welcome to submit the application form online and offline. Now you can join Pak army after graduation in different fields according to your interests. Your physical fitness and mental sharpness matter a lot.

The Army of Pakistan is considered as one of the strongest armies in the world. Due to our brave soldiers, we are winning battles against our enemies. Apart from this, the desire to getting the rank of martyr also pushes us forward on our borders. Due to this, there is a great passion for our army. Other than this, the army department is selecting candidates on 100% merit. They are always looking forward to the brave person who could serve Pakistan on the front line. Due to this, the process of recruiting soldiers and other persons in the army is very powerful. If you want to Join Pakistan Army, then some opportunities are available under on ready.pk.

There are three to four different process in the selection and screening system. Firstly, there will be a written test. Secondly, the candidates will undergo the medical test. After that, there will be interviews and final calling interviews. This is the process if you are applying under some courses like PMA long course, captain course, and others. On the other hand, the process of hiring other candidates is quite different. Some will come through the physical test while some will enter an army due to army exams. Here are some jobs opportunities in Pakistan Army.

Pakistan Army also known as Pak Fauj is a Land Force which is very poweful, very strong department and one of the most tallented force in all over the World. Join Pak/Pakistan Army 2022 by applying in Latest Pak Army Jobs 2022 for Fresh/Graduates after Matric, B.A, B.Sc, B.CS in It, Medical, Education and other fields. Check advertisements, Download Application form, Prepare Test online for all jobs in Army Pakistan. You can see all ads for Pak Army Jobs for Soliders, after IT, for Females available here and updates everyday. Similarly you can join field of Pak Army as Captain, through DSSC, SSRC, PMA long and short course 141,142, Through Technical cadet course. Pakistan Army jobs 2022. Here you can find all the latest jobs in Pakistan Army 2022.

Jobs for Minorities in Pakistan

Pak Army Jobs, Check and Join Pak Army online registration 2022 just befor tha last date of submission, you can check all details for different rake and qualification like jobs in pak army after Middle, Matric, Intermediate, graduation and review all vacancies on jobs advertisements listed below on this page. Join Pak Army Jobs 2022 in Pakistan. It has its very own testing and interview system varies according to the position in which you are going to apply. Before apply you can also see the number of seats for minorities. Check all jobs in Pak Army 2022 here. You can also see Pak Army jobs in different cities Army jobs in Lahore, Army jobs in Karachi,Peshawar, and for different fields like ‎Pak Army Jobs 2022 for IT like for computer operator, Computer assistant.

These are the job opportunities through which you can join Pak Army. So, don’t let these opportunities go away. Apply for them now.

Ans: The age limit to join the Pakistan army for the civilian is 17 to 22 years and for the serving armed forces personal with the exception of army soldiers have the age limit of 17 to 25 years. The age limit of the candidates after passing the BA/BBA/BA (Hons.) is 17 to 24 years.

Ans: The candidates after the completion of matric and intermediate should have the age between 17 to 22 years. However, the candidates who have done masters/MBBS/MBA can join the Pakistan army after 30 years.

Ans: Following is the qualification required for the Pakistan army jobs.

Ans: The Pakistan Army Captain Salary ranges from 45,000 PKR to 75,000 PKR and the salary of the captain increases with the years of experience.

Ans: The age limit for PMA long course is 17 to 23 years and for the serving armed forces personnel, the candidates should have the age between 17-23 years.

Ans: Following are some of the best army jobs that a person can join.

Ans: The army jobs offer a good career choice for the various personality types as these jobs are more protocol-oriented as compared to the other civilian jobs. Furthermore, as an army person, you have to move out to various places with your family members. The army jobs are considered as best paying jobs as they offer growing opportunities to the individuals. Moreover, the army jobs provide the handsome amount of many with many other perks.

Ans: Some of the highest-paid Army jobs are mentioned below.