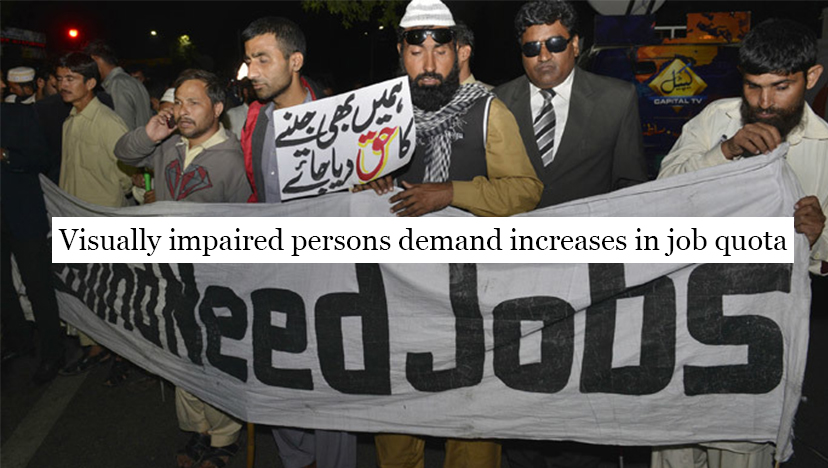 People with disabilities are guaranteed the same rights as any other citizen according to the constitution of Pakistan. But, most of the times they don’t get the same kind of treatment at all the government and private departments. They often don’t stand any chance in most of the departments based on their disability which is extremely biased and partial on the government and private sectors end. They should be given the chance on merit, if they qualify for some e post, they should have the right to be considered for it as any other person. In Pakistan, the opposite happens and people with disabilities must struggle to get a fair share of rights.

They aren’t considered eligible for most of the jobs, particularly the good ones. Their disability comes in the way of their talent when it should be the other way. Their disability shouldn’t be made as a hurdle in their way, but the state should compensate for that by providing them with good facilities. Our situation is so bad that there are no proper facilities for visually impaired people at our educational institutions and most of the times they don’t get the chance to get an education due to these issues. If they ever succeed at getting an education, then they must prove the credibility of that education. Recently, a visually impaired person topped the exams but still, he must go through the whole process of rejection to the post of a judge owing to his disability. This incident in its core is a proof of our prevailing rules that comes into action when someone fights against the system, stands up and prove that they deserve a fair chance, fulfills the merit but still must face problems.

This isn’t the way in the developed countries, they give the same rights to the disabled people as they to another person. They even make it easy for such people in all the departments and accommodate them. There are proper rules to accommodate such people in the educational institutes, they get the same kind of treatment as any capable and this isn’t given out of sympathy but that is their constitutional right. Also, if they get the education and can support themselves financially, they become the responsible citizens of the state and not a burden on the state and society. The need of the hour is to start taking an action against the prevailing system, proper policy making should be done to change the general behavior in departments, on streets and awareness among the public that they shouldn’t be outcast. They should be taken as normal people of society and not as a burden, which is only possible if we start treating them as one.