Top 10 Government Hospitals in Which You Can Apply For obs 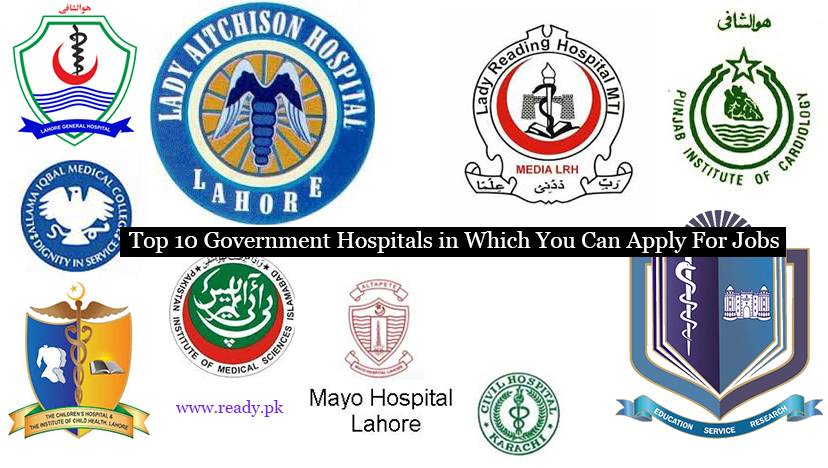 Top 10 Government Hospitals in Which You Can Apply For Jobs

Democracy is the best form of government because it represents the will of the majority, forces the government represents to think of the masses who will elect them only if they perform to their needs and not to their own vested agenda’s. People have thrown away the governments who were not delivering to the demands of the public. The demands of the public are concerning health, education, basic rights, liberty of expression and employment, etc. Human development is the most important factor of democracy and democracies ought to deliver on this.

The past governments in Pakistan were more focused on the next general elections than the next generations. They used to work on projects that can serve as a display for them in the next elections. The human development wasn’t the primary focus, and this has served in the prevailing deteriorating health and human conditions in Pakistan. The health department is facing serious issues of administration, facilities, and services.

The major government hospitals are in depressing conditions with outdated machinery, the doctors who are in no mood help patient recover, the beds were short in number and the overall situation which is not pleasing at all.

Jinnah hospital located in Lahore is one of the most reputed hospitals in Pakistan as accredited by the Joint Commission International, the gold award of performance. The Hospital has a full-fledged Emergency Department, 25 Outpatient consultation rooms, ICU, CCU, Delivery suites, Endoscopy Room and Day Surgery unit. The Diagnostic Centre features advanced laboratory and imaging equipment like the Open MRI, CT Scan, Mammography, 4D Ultrasound, and Fluoroscopy. The Hospital offers both inpatient and outpatient care which covers a wide range of Medical and Surgical Specialties. These are the statistics on paper and doesn’t really do justice to the conditions the hospital is living in. The condition of the services offered, the treatment of patients and the general behavior of the doctors and staff with the patients is questionable. 2,3 patients on a single bed don’t really give the reflection of international or human standards of health. There is a lot that should be done to maintain high standards of health.

Lady Aitchison Hospital is in the second position in our list of top 10 government hospitals in Lahore. The original idea for the establishment of a medical college for undivided Punjab was placed before the Imperial Government in 1857, but shelved because of ‘War of Independence’, The need was so great that is was decided to make the beginning by establishing a Medical School in 1860.

The hospital was made to have a facility in Punjab that can serve people. The only hospital available was in Calcutta and then this hospital was formed.

The mission was to establish Lahore General Hospital as the best public sector hospital providing tertiary level care of health services to the community. Develop strong coordination with the allied departments and develop the human skills to be more effective and efficient.

A piece of land measuring one square and seven-acre i.e. (256 Kanals) situated on Ferozpur, Road, Lahore about 17 kilometers from Lahore was proposed for beggar house. The foundation was laid down by her Excellency BEGUM NAHEED SIKANDAR MIRZA W/O Governor General of Pakistan on 27-02-1958. The first phase of the building was completed in late 1958. An opening ceremony was held on 30-09-1958 by her Excellency BEGUM NAHEED SIKANDAR MIRZA.

Later, the beggar was turned into Lahore General hospital to accommodate the increasing demand on other hospitals.

Mayo Hospital is in the heart of Lahore City and is surrounded by busy commercial and thickly populated residential areas with famous Anarkali Bazaar, Nila Gumbad, Gawalmandi and the Walled City of Old Lahore around it.

Mayo hospital is one of the major hospitals in the city and even in the province which tends to cater to the influx of patients coming from all parts of the country. Some of the senior most doctors in the country work in the hospital and facilitate people. But, the main problem is the pressure of the patients on the hospital which makes it difficult for the doctors to check each and every one of them resulting in the dates of months and even years. Someone who needs immediate medication, surgery cannot just around for a year to get the surgery done. This is just unfair with the patients who can’t afford treatment in private hospitals.

Punjab Institute of Cardiology is in Lahore and has been a source of relief for heart patients. PIC trains postgraduate doctors and paramedics in addition to assisting the rest of the cardiac hospitals in Punjab. Moreover, they run awareness campaigns to educate the masses on preventive measures towards heart diseases.

Treatment is free of cost for the poor people and private patients get the treatment at an extremely reasonable price than the other private hospitals. The emergency is open 24 hours and the treatment in an emergency is totally free irrespective of social positions of the patients. The range of facilities available for comprehensive treatments include a 347 bedded hospital, all relevant diagnostic tests, interventional and operative procedures, and intensive cardiac care units.

But, often people claim of corruption and how having a resourceful person at your back can get you an early number than someone who doesn’t have any source. Patients aren’t given dates easily and most of them must wait for months to get a bed. This is just doesn’t make sense that how can a patient wait for months to get the treatment. This kind of absurd administration has forced people to lose faith in government hospitals.

In 1958, a separate outpatient department of Mayo Hospital, Lahore was set up for the use of government employees. In 1960, this was converted into 55-bedded and name as Wahdat Hospital; it had medical and surgical facilities, together with laboratory and X-Rays unit. it was later renamed as ‘Services Hospital’.

The aim of the hospital was to provide tertiary level treatment to the patients by the deployment of well-trained doctors at an affordable price. The hospital suffers from the same problem of shortage of beds, poor administration, outdated mechanisms and lack of transparency.

A 200-bed hospital is believed to deal 2500 patients per day and the casualty cases at the accidents and emergency division number more than 1500 or 1800 every day, according to a report of 2008. Lady Reading Hospital Peshawar is a surprisingly beneficial development for poor and working-class individuals for giving therapeutic, surgical, ENT, and T.B. wards. The hospital must undergo some changed in the recent health reforms introduced by the KPK government. The resistance faced by the health reforms bill was a time check that how the system is taking control of the process and is only facilitating a few elites in the country.

Children hospital Lahore is the best option when it comes to child health and care. The hospital is full time dedicated to treating children. Offering remarkable services and the most progressive medical facilities, these hospitals are some of the best in Pakistan. Now and again these hospitals are preferred by the general population over private hospitals as they are economical, equipped with most recent machinery and profoundly qualified specialists, proficient staff and quality medicines.

Though the demand has increased with the population growth and there should be other options available to people to get easy and affordable treatment for their children. One of the major problems is the availability of all these hospitals in the big cities of the county and people have to travel for hours to reach to these hospitals.

It is one of the best hospitals in Karachi that has not disappointed in its capacity to inspire visitors and cure the individuals who experience the ill effects of a wide range of diseases, by giving best in class present-day modern equipment and treatment strategies to its patients. The problems and complaints are the same in nature as faced by the majority of these and the number of complaints has just gone high in the past few years.

All of these hospitals were of times when the population number was even lesser than what it is today and also the facilities available might be in accordance with that time but they just don’t stand in compliance with today’s world. The hospitals should be reformed according to the emerging needs and should be made transparent to the public.