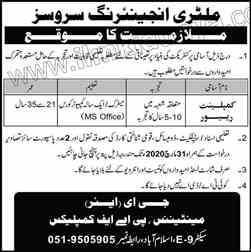 Search all recent published military engineering service jobs 2022 with all new jobs advertisement of MES jobs 2022 Pakistan. It is one of the most important and vital Government department in Pakistan where many employees are working on different positions. This is not a new Govt department related to Military because the concept of this existence was present on the time of British-India. Military Engineer Services works for the engineering requirements at the earlier time of the 18th century. For all these services and need of Military equipment, another Department name with PWD stands with the Public Works Department started working under the observation of Military Board. This was the time of the in the middle of the Nineties Century. After that PWD separated into other different departments in 1866. Military Engineers took this as Military Works Branch. Another important branch was Civil Works Branch with the presence of the Irrigation Branch. On this list, the last Branch included with Railway Branch.

Director General Military Works was leading one of the most essential branches which were Military Works Branch. This was really necessary positions because DGMW has all command on the on all matters and communication deals and conversations running in this Department from Commander-in-Chief to all members. This brach was not limited here as Military Works Services was exceeded in this working and Services enhancement in 1923 with a growing and more developed role. This was all happened before the independence of Pakistan. Again at the duration of 1924 to 1947, the new division was made with new areas and command like MES Commands are present here. Like Headquarters at Rawalpindi as Northern Command. At number two: Headquarters at Agra as Central Command. Then its came Headquarters at Poona according to Southern Command. On the Eastern Command, It was Headquarters at Calcutta.

But After the Pakistan Independence, MES Military Engineer Services Pakistan changed. And the distribution of the MES occurred with the separation formula. According to that Northern Command cantonments plus East Bengal will be added to the MES of the Pakistan Army. But the East Punjab Part will be excluded from this mark mentioned by MES distribution system. Then these Military Engineering Services commands under the control of Pakistan Chief of Engineering. At that Time He was the only one who was controlling all three Armed Services Army, Navy, Airforce. The most important decisions of MES accordingly to situations and workload was dealt with by the Engineer-in-Chief. Then with passing time, all forces hold with different Heads. This was approved by Ministry of Defence at 1960.
If you are really wanted to apply in the Military Engineering Services in Rawalpindi in Latest vacancies then you can easily view a list of new jobs ads with the procedure to apply. As any new job publishes in MES  military engineering services jobs application form is also uploaded by our talented team members. You just need to view this page on a daily basis so that you will not miss any job ad. You can also subscribe at ready.pk for these jobs alerts on your mobile. So if you are searching for dw & ce army Pakistan Jobs You can download and view without any problem. If you will face any problem then you can surely contact us on our social media channels.
Just View MES Jobs Vacant positions ad and see eligibility criteria and then just apply before the last date. The total number of vacancies are also written on this page with respect to their job. You can also view daily Government jobs in Rawalpindi from Newspapers daily announced jobs in many categories from Teaching to engineering, Accounting and Finance to Marketing. You can view all Armed Forces jobs like Pakistan Army jobs, Pakistan Navy Jobs 2022, Pakistan Air force Jobs 2022 on Pakistan best Jobs Portal.
You can download Mobile Application for govt jobs for your ease. It is really free of cost and helpful for the mobile Phone user. So don't wait just visit now and download Govt jobs App from google play store.