Get update of all KPK jobs in Govt in Pakistan on our website on daily basis just after the official announcement by Government department in Khyber Pakhtunkhwa. 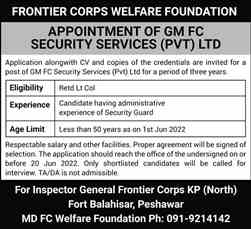 Application alongwith CV and copies of the credentials are invited for a
post of GM FC Security Services (Pvt) Ltd for a period of three years.

Respectable salary and other facilities. Proper agreement will be signed of
selection. The application should reach the office of the undersigned on or
before 20 Jun 2022. Only shortlisted candidates will be called for
interview. TA/DA is not admissible. 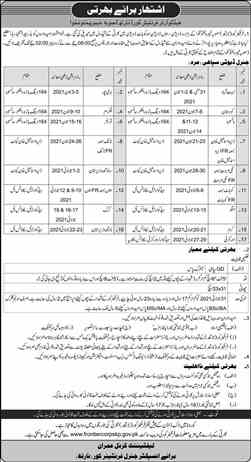 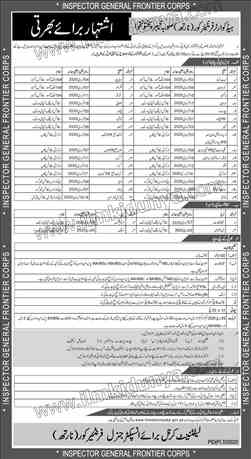 If you want to remain up to date for all Government jobs in KPK Khyber Pakhtunkhwa you can join us on Social media channels Facebook, Twitter, LinkedIn. For daily govt jobs for the different post like Soldier (Spahi) jobs at Frontier Corps Govt of kpk, for Inspector General jobs and many other categories of corps. You have to keep yourself up to date with the latest jobs by subscribing at ready. All currently declared jobs in Government in Khyber 2022 are available on this page with all new jobs in Government Sector.

KPK is also called as NWFP Province named with North-West Frontier Province. There are many Government departments exist in this Province of Pakistan. Many Armed and Frontier Depart Employment vacancies are offers for eligible and Skilled candidates. So check all criteria before applying for any position. Check age, Experience, Qualification, and Education in the ad. Procedure to apply in also mentioned for applicants and candidates who are interested.

We have created a section where you can also prepare your jobs tests online without any hassle. You just need to visit the Online Jobs Praparation Section and then select the Subject and Topic about which you want to take test. This is really a good way for the self analysis and preparaing test without heavy fee structers. You will not miss any latest update about Frontier Corps KP jobs Latest 2022.